Equities or commodities are valued by their intrinsic strength on an absolute basis, while foreign exchange is valued by the relative strength of one currency with respect to another. Some of the economic indicators that fall into the realm of fundamental analysis are interest rates, employment reports, and inflation reports, among others.

WHAT IS FUNDAMENTAL ANALYSIS?

Trading on the fundamentals – also referred to as trading the news – is the study of news events and economic statistics to determine trading opportunities. Referred to as fundamentalists, these traders pay close attention to changes in economic indicators such as interest rates, employment rates, and inflation. 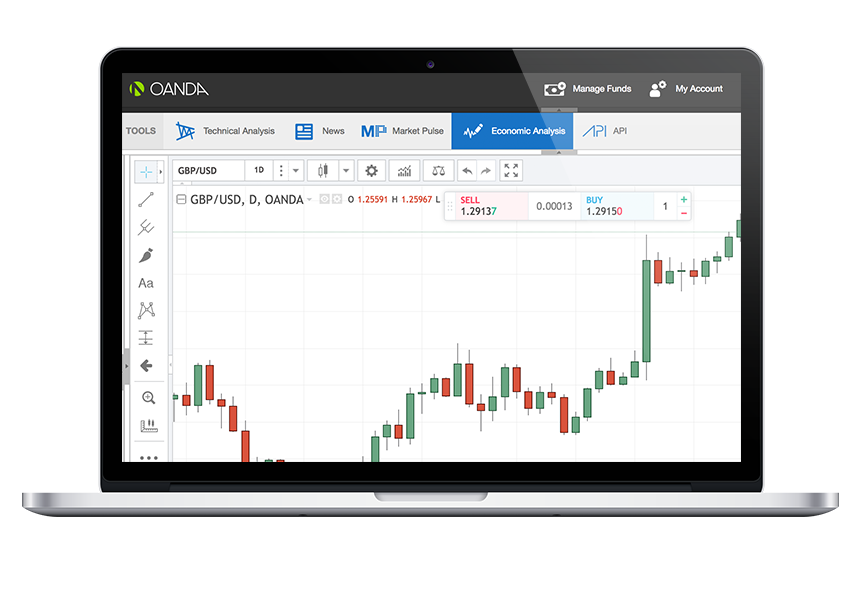 Forex and CFD prices are impacted by macro and micro-economic data, geo-political events and their linkages. These factors may include for example, GDP growth rates, potentially disruptive geopolitical events, employment statistics, interest rates, and balance of trade reports among others.

Begins by analyzing broad brush macroeconomic factors and aggregates of data working downwards narrowing and refining the search to include only those currency pairs that present a profit potential.

BALANCE OF TRADE AND INTEREST RATES

THE FORCES DRIVING DEMAND AND SUPPLY

These have a significant impact on the valuation of commodities. For example, a growth of international conflict may result in increased demand for nickel, which is used in armaments and ammunition manufacturing driving up prices.

Open a demo account to fine tune your trade strategies

Traders pay close attention to economic indicators which can have a direct, and somewhat predictable, effect on the value of a nation's currency in the forex market.

One of the most influential of the economic indicators, GDP measures the total value of all goods and services produced by a country during the reporting period. An increase in GDP indicates a growing economy, and for this reason, GDP is used to measure the level of inflation within the economy. View current stats

Measures the cost to buy a defined basket of goods and services. It is expressed as an index based on a starting value of 100. A CPI of 112 means that it now costs 12% more to buy the same basket of goods and services today than it did when the starting index value was first determined. By comparing results from one period to the next, it is possible to measure changes in consumer buying power and the effects of inflation. Inflation is a concern to currency traders as it affects the price of everything bought and sold within an economy, and this has a direct impact on the supply and demand for a country's currency. Inflation is an increase in the price of goods and services. While inflation by its very definition suggests economic growth, inflation that occurs too rapidly actually weakens consumer buying power as prices increase at a faster rate than salaries. View current stats

Also an inflation indicator, the PPI tracks the changes in prices that producers receive for their products. Expressed as an index relative to 100. Excludes volatile items such as energy and food to avoid distorting the index. By measuring the prices received by domestic producers, it is possible to project how the consumer-level prices could be affected. View current stats

Employment reports have an immediate impact on currencies because employment levels directly affect current and future spending habits. An increase in unemployment is a negative indicator as it implies that more people are not receiving a regular salary. This is a sure signal that consumer spending will decline. View current stats

Most Central Banks maintain a "benchmark" interest rate. Depending on the jurisdiction, the Central Bank rate serves as the guide for the rate at which the Central Bank and other commercial banks lend each other funds to meet short-term operational needs. Commercial lending rates are also affected by the Central Bank rate, and it is this linking of short-term rates to the commercial rates that makes interest rate policy the primary monetary tool for Central Banks. As noted earlier, the Central Bank can increase rates during periods of high growth (inflation) in a bid to reduce consumer spending which should help bring growth back to a more manageable level. If deflation is a problem and the economy needs a boost, Central Banks can lower interest rates to entice more consumer lending. The expected outcome is that overall consumer spending will increase as consumers have access to less costly loans. Forex traders in particular pay close attention to changes in interest rates as investors tend to seek out currencies offering higher returns and this demand can cause a currency to appreciate. Also, the greater the interest rate differential between two currencies, the greater the profit potential of a carry trade strategy. See Trading Strategies and Best Practices in Lesson 4 for more information on carry trades. View current stats

Yield is the interest on fixed-income securities which includes such investments as futures contracts and government bonds. Referred to as "fixed" income because the payment stream (the yield) remains constant until maturity. For example, a simple 5-year bond with a 3 percent annual yield, would pay $300 a year for the next five years on an initial $10,000 investment. The yield curve shows the relationship between the yield, and the time to maturity. When dealing with fixed-income securities, investors want to ensure that the fixed yield remains profitable right up until maturity. As an investor you may be happy with a 5 percent return when the basic lending rate is 2 percent. However, if short-term interest rates rise and the lending rate jumps to 6 percent, your 5 percent return is no longer so attractive, and there are probably other options that could generate more income for your investment. Liquidity spread is the term used to describe the difference between the yield and short-term rates. If short-term interest rates rise above the fixed yield, the bond holder is said to be in a position of negative liquidity spread. When plotted on a chart, the yield is represented along the y-axis, while time to maturity is charted vertically on the x-axis. This results in a yield curve shape that some investors suggest offers insight into future interest rates. Consider the following so-called "normal" yield shape: U.S. treasury bills - or "T-bills" - are a form of debt issued by the U.S. government. The maximum maturity is one year, but the 3-month T-bill is a popular choice for short-term investment. Unlike bonds that pay a regular, fixed-rate amount, T-bills are sold at a discount to par (the "face" value). At maturity, the buyer receives the full face value of the T-bill. For example, if an investor buys $10,000 worth of T-bills for $9,900, at maturity, the investor receives $10,000. The difference - $100 in this case - is the yield earned by the investment.

Compares the total value of imports to the total value of exports for a reporting period. A negative value indicates that more goods were imported than were exported (a trade deficit) – while a positive trade balance means that exports exceeded imports (a trade surplus). If the balance of trade shows a surplus or declining deficit, then there may be an increased demand for the currency. If the report shows a growing deficit, then the increased supply – together with a decrease in demand for the exporting currency – could lead to a devaluation against other currencies. View current stats

Learn the skills necessary to open, modify and close trades, and the basic features of our trading platform.

Getting Started with OANDA

Technical analysts track historical prices, and traded volumes in an attempt to identify market trends. They rely on graphs and charts to plot this information and identify repeating patterns as a means to signal future buy and sell opportunities.

Leveraged trading involves high risk since losses can exceed the original investment. A capital management plan is vital to the success and survival of traders with all levels of experience.

Learn risk management concepts to preserve your capital and minimize your risk exposure. Seek to understand how leveraged trading can generate larger profits or larger losses and how multiple open trades can increase your risk of an automatic margin closeout.

This page is for general information purposes only: examples are not investment advice or an inducement to trade. Past history is not an indication of future performance.

Execution speed and numbers are based on the median round trip latency from receipt to response for all Market Order and Trade Close requests executed between January 1st and May 1st 2019 on the OANDA execution platform.

MT4 hedging capabilities are NOT available to residents of the United States.

The Commodity Futures Trading Commission (CFTC) limits leverage available to retail forex traders in the United States to 50:1 on major currency pairs and 20:1 for all others. OANDA Asia Pacific offers maximum leverage of 50:1 on FX products and limits to leverage offered on CFDs apply. Maximum leverage for OANDA Canada clients is determined by IIROC and is subject to change. For more information refer to our regulatory and financial compliance section.

This is for general information purposes only - Examples shown are for illustrative purposes and may not reflect current prices from OANDA. It is not investment advice or an inducement to trade. Past history is not an indication of future performance.