Learn all the trading fundamentals before you start placing trading orders. Practice these key elements on your demo account using virtual money, and get ready to trade CFD and forex live in real-time with your account balance. 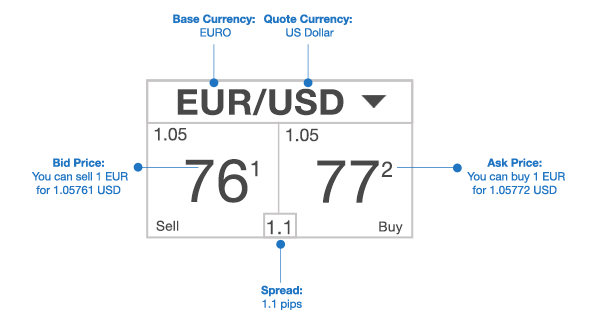 The Exchange Rate is the price for which foreign currencies are traded. The Quote List and Quote Panel show different views of the current OANDA exchange (buy/sell) rates in real time. When there is movement in the exchange rate for a currency pair, the green and red up/down indicators alert traders to momentary changes in direction.

Currency pairs are always listed in the same order. For example, the most commonly-traded currency pair consists of the Euro and the U.S. dollar. This pair is always listed as EUR/USD and never the reverse order. In this example EUR is is the BASE currency, and USD is the QUOTE currency. When published with an exchange rate, the currency pair indicates how much of the quote currency is required to purchase one unit of the base currency.

The SPREAD is the difference between the two prices. The bid price is always less than the ask price because brokers pay less than they receive for the same currency pair. This difference – known as the spread – is how your broker is compensated for their services in executing your trade. Some brokers, including OANDA, also offer pricing options that include a commission combined with lower spreads. A spread is commonly measured in pips. The pip is the value of the 4th decimal place for pairs other than for JPY, where it is 2nd decimal place. OANDA, however, offers increased pricing transparency by displaying 5 decimal places for currency pairs, other than JPY in which 3 decimal places are shown. This is called a pipette.

The BID price is the rate that your broker is willing to pay for the currency pair; in other words, this is the rate you receive if selling to the market. For example in the rate panel shown, the bid price is 1.05761. You could sell one Euro for 1.05761 US dollars.

The ASK price is the rate at which your broker is willing to sell and represents the rate you must pay to buy the base currency. In the example 1 Euro will cost you 1.05775 US dollars.

What is a PIP and what is it's value?

Active trades are referred to as open positions and are subject to fluctuations in the exchange rate. Open positions are closed by entering into a trade that takes the opposite position to the original trade, bringing the total amount for the currency pair derivative back to zero. The OANDA trading platform automates the process of closing a position for you. For example, if you have a short position consisting of 50,000 units of USD/CAD, you only need to click a single button to create and execute a buy order for 50,000 USD/CAD to close your position and realize your return.

A short position is the opposite of a long position. In order to close a short position, you would need to buy enough of the currency pair derivative to bring your position back to zero. If you can buy this back for less than you earned when you sold it originally, the difference is retained as profit.

The forex market is the largest and most liquid financial market. Daily activity often exceeds $4 trillion USD, with over $1.5 trillion of that conducted in the form of spot trading.

Spreads in the forex market tend to be tighter (less), than the spreads applied to other securities such as stocks. This makes OTC forex trading one of the most cost-effective means of investment trading.

Trade on over 100 instruments, including currency pairs, indices, commodities, bonds and metals †.

WHAT IS A PIP?

A pip is the price move in a given exchange rate. Understanding the change in value helps traders to enter, or edit orders according to the objective of the strategy plan.

Open a demo account to fine tune your trade strategies

A measure of how much the price of a currency changes over time.

A hedge is the practice of buying a physical commodity to protect against a possible currency devaluation.

Market-Maker – A dealer or broker that provides a two-way quote (i.e. a bid and ask price) for which the dealer agrees to buy or sell. Offering both sides of a trade literally "makes" a market for those wishing to engage in currency trading. In recent years, new developments in web-related technologies have made it possible for independent brokers to develop internet-based trading platforms. These brokers serve as market-makers and provide a two-way quote for each currency pair they support. OANDA is an example of a forex market-maker.

The spread is the difference between the buy (offer) and sell (bid) price that we quote. For example, if the underlying asset is trading at 100, our offer price (the price at which you can buy) might be 101 and our bid price (the price at which you can sell) might be 99. You pay the spread by opening and closing a position. The spread we offer is a dynamic spread, and so can vary at any time and may be different when you open and close a position.

An attempt to profit on the fluctuation in prices for currencies and other investment securities.

A commitment to fix the value of a currency to a specific quantity of gold. Under this system, the holder of the country's currency can convert funds to an equal amount of gold. After World War II, economies in Europe were left in tatters. To help these economies recover – and to avoid mistakes made in the wake of the First World War – the Bretton Woods Accord was convened in July 1944. Several resolutions arose from Bretton Woods, but it was the "pegging" of foreign currencies to the U.S. dollar, rather than gold, that arguably had the greatest immediate impact on the global economy.

A contract to buy or sell a specified amount of a currency pair at a given exchange rate.
See More Definitions

Learn the skills necessary to open, modify and close trades, and the basic features of our trading platform.

Getting Started with OANDA

Technical analysts track historical prices, and traded volumes in an attempt to identify market trends. They rely on graphs and charts to plot this information and identify repeating patterns as a means to signal future buy and sell opportunities.

Leveraged trading involves high risk since losses can exceed the original investment. A capital management plan is vital to the success and survival of traders with all levels of experience.

Learn risk management concepts to preserve your capital and minimize your risk exposure. Seek to understand how leveraged trading can generate larger profits or larger losses and how multiple open trades can increase your risk of an automatic margin closeout.

This page is for general information purposes only: examples are not investment advice or an inducement to trade. Past history is not an indication of future performance.

Execution speed and numbers are based on the median round trip latency from receipt to response for all Market Order and Trade Close requests executed between January 1st and May 1st 2019 on the OANDA execution platform.

MT4 hedging capabilities are NOT available to residents of the United States.

The Commodity Futures Trading Commission (CFTC) limits leverage available to retail forex traders in the United States to 50:1 on major currency pairs and 20:1 for all others. OANDA Asia Pacific offers maximum leverage of 50:1 on FX products and limits to leverage offered on CFDs apply. Maximum leverage for OANDA Canada clients is determined by IIROC and is subject to change. For more information refer to our regulatory and financial compliance section.

This is for general information purposes only - Examples shown are for illustrative purposes and may not reflect current prices from OANDA. It is not investment advice or an inducement to trade. Past history is not an indication of future performance.